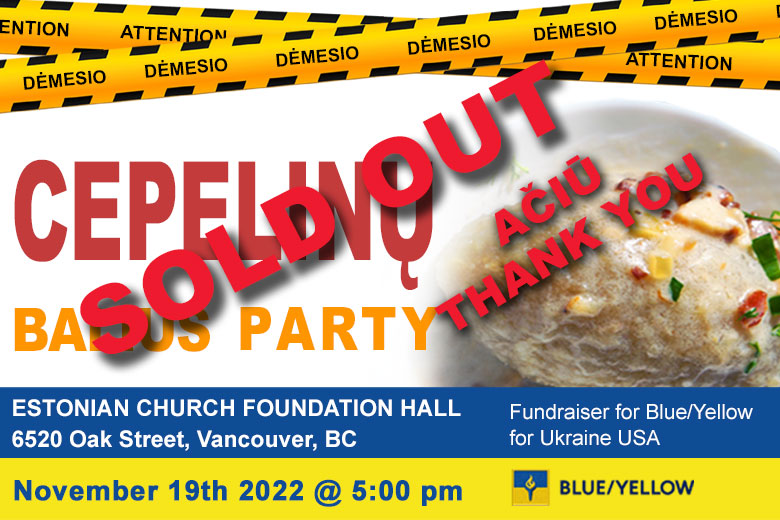 We warmly invite everyone to a Cepelinai Party on November 19! All proceeds will go to Blue/Yellow for Ukraine USA.

The evening will include a cash bar, cepelinai dinner and Lithuanian dessert, music and a 50/50 draw. Doors open at 5PM. Dinner at 6PM.

We are thrilled to announce that we will be joined by Rima Žiuraitis, Managing Director for Blue/Yellow for Ukraine USA as our Special Guest Speaker! She will be sharing information from her recent trip to Ukraine and speaking about the impact her organization is having on the ground in this unjust war.

On this occasion we call on our community members, friends and allies, and all Lithuanians to join us in a community evening of solidarity and support, and of course, Cepelinai!

Come, and bring your friends and family. We hope to see you all there!

The Lithuanian Community of British Columbia invites you to an informative, commemorative and educational event. You will have an opportunity to learn about the Jewish contribution to prewar Lithuanian culture, to discover the fate of the Lithuanian Jewish community during the Holocaust, and to honour the victims of genocide in a candle-lighting ceremony.

This program marks the first time that the National Memorial Day for the Genocide of Lithuanian Jews is being commemorated in Canada.

The program, which will be presented by community members of Lithuanian Jewish heritage, will include remarks by Nina Krieger, Executive Director of the Vancouver Holocaust Education Centre.

All are welcome to attend.

For more information, or to share this event with your friends and colleagues, please visit:
National Memorial Day for the Genocide of Lithuanian Jews – Community Commemoration | Facebook

Sponsored by:
The Lithuanian Community of British Columbia 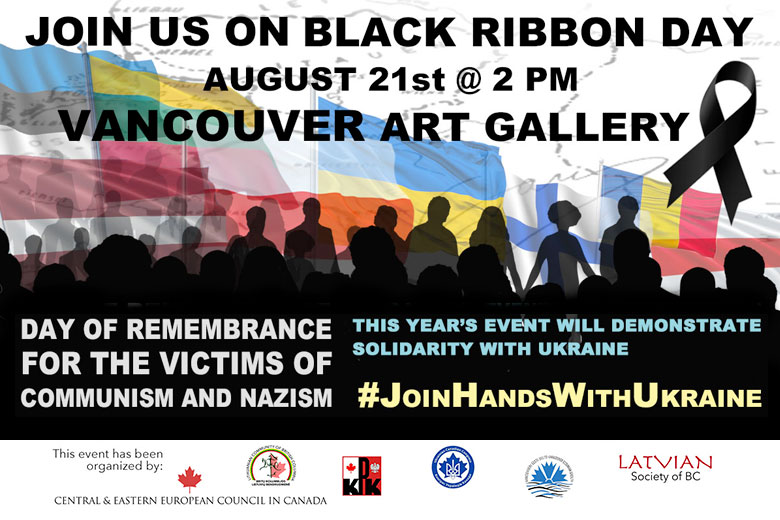 We warmly invite all community members, friends, allies, and Canadians of Lithuanian descent to this year’s Black Ribbon Day commemoration at the Vancouver Art Gallery Plaza on August 21 at 2PM. This year’s Black Ribbon Day is dedicated to Ukraine. On this occasion we call on you to join us to show our support for Ukraine, for if Russia succeeds in this war of aggression, it will go on to threaten Lithuania, the Baltic and Central and Eastern European states. Come, and bring your friends and your family!

It was on Black Ribbon Day in 1989, 50 years after the Molotov-Ribbentrop Pact that Lithuania, Latvia and Estonia organized the Baltic Way, when some two million citizens joined hands across three countries and 700 kilometers to show their determination to regain their independence, thereby leading to the dissolution of the Soviet Union. A powerful echo of this event took place in January 1990, when a million or more Ukrainians joined hands in a human chain that also stretched for some 700 kilometers, signifying their hope and determination for independence.

At this year’s event on Sunday August 21 at 2:00 PM at the Vancouver Art Gallery Plaza, we will commemorate the victims of the Nazi-Soviet terror that began with the 1939 pact, and the millions who continued to live under Soviet occupation until the 1990s. We will also show our moral support for Ukraine, a sovereign state that gained its independence in 1991 and is now fighting courageously to preserve its independence and national identity.

The one-hour program will include community speakers, a reading of a proclamation for Black Ribbon Day from Vancouver City Hall, a dramatic reenactment, music, and more. At the end of the event, we will invite participants to join hands with one another as a visible and public display of solidarity for Ukrainians and Ukraine.

Organizations supporting this event: Preparations for this year’s event in Vancouver are underway with the support of the following local organizations, together with the Central and Eastern European Council in Canada (CEEC): the Canadian Polish Congress – BC Branch, the Ukrainian Canadian Congress BC Provincial Council, the Lithuanian Community of British Columbia, the Vancouver Estonian Society, and the Latvian Community in British Columbia. 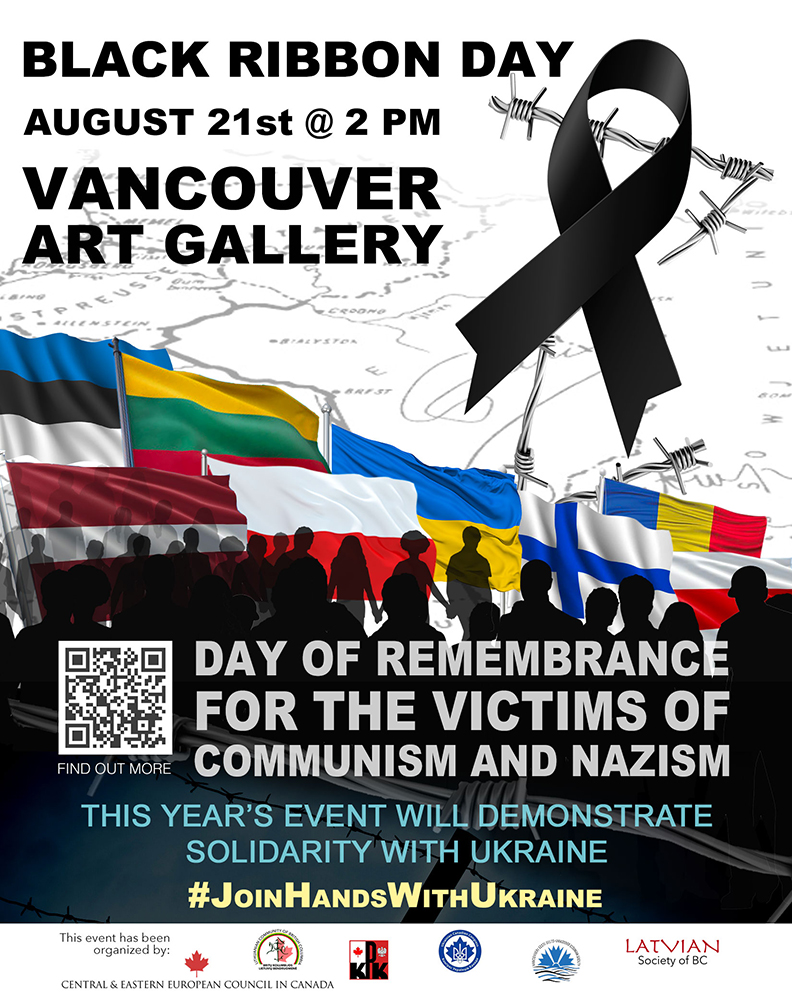 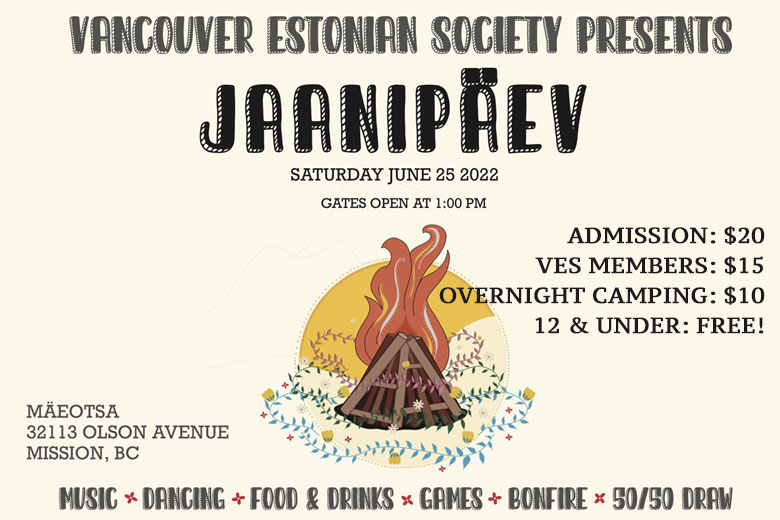 We warmly invite all Lithuanians, community members and friends to celebrate Midsummer together with the Estonian community at Mäeotsa in Mission – a day of music, games, a traditional bonfire and more! 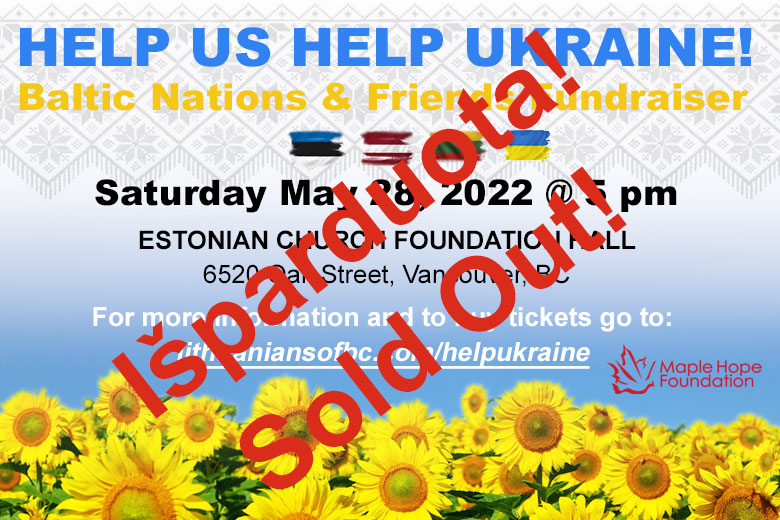 We are pleased to invite you to the Baltic Nations & Friends Fundraiser for Ukraine on Saturday, May 28th hosted by the local Estonian, Latvian and Lithuanian communities.
This benefit dinner arose out of our shared desire to come together in unity and solidarity as we have done so many times before, to show our unwavering support for Ukraine and renew our bonds of friendship.
Your ticket for $40 ($10 for children) will include a traditional Ukrainian dinner, live entertainment, cash bar, a special speaker, and Ukrainian crafts for sale. There will also be a 50 50 draw! All proceeds will go to the Maple Hope Foundation.

For more information and to purchase tickets click on the link: https://www.lithuaniansofbc.com/helpukraine/

We look forward to seeing you there! 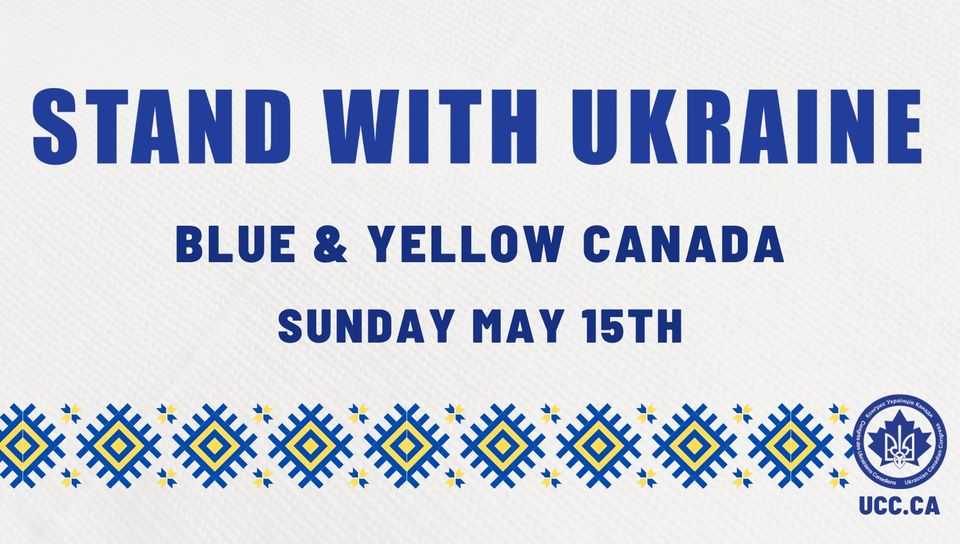 Stand With Ukraine Rally and March in Vancouver BC

Russia’s war in Ukraine continues to escalate. Every day we see new evidence of war crimes against the Ukrainian people. It is a critical time for Ukraine, and time for us to remind Canadians of the ongoing war.
Therefore the UCC National is issues a Canada wide call for National Day of Action on Sunday, May 15, 2022 to continue the Stand With Ukraine campaign.

UCC BC Provincial Council is joining this call for action and urges our communities in BC to turn every city in our province blue & yellow and show the Canadian and Ukrainian public how much Canadians continue to support Ukraine at this difficult time. 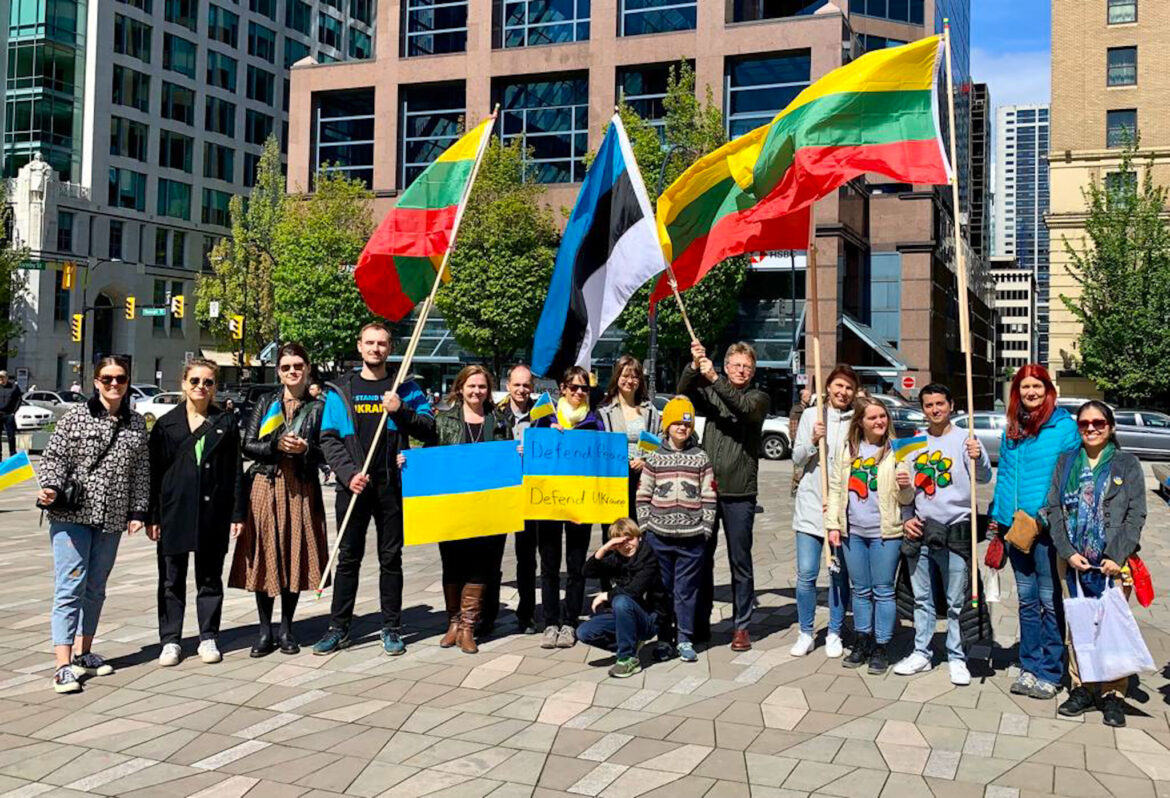 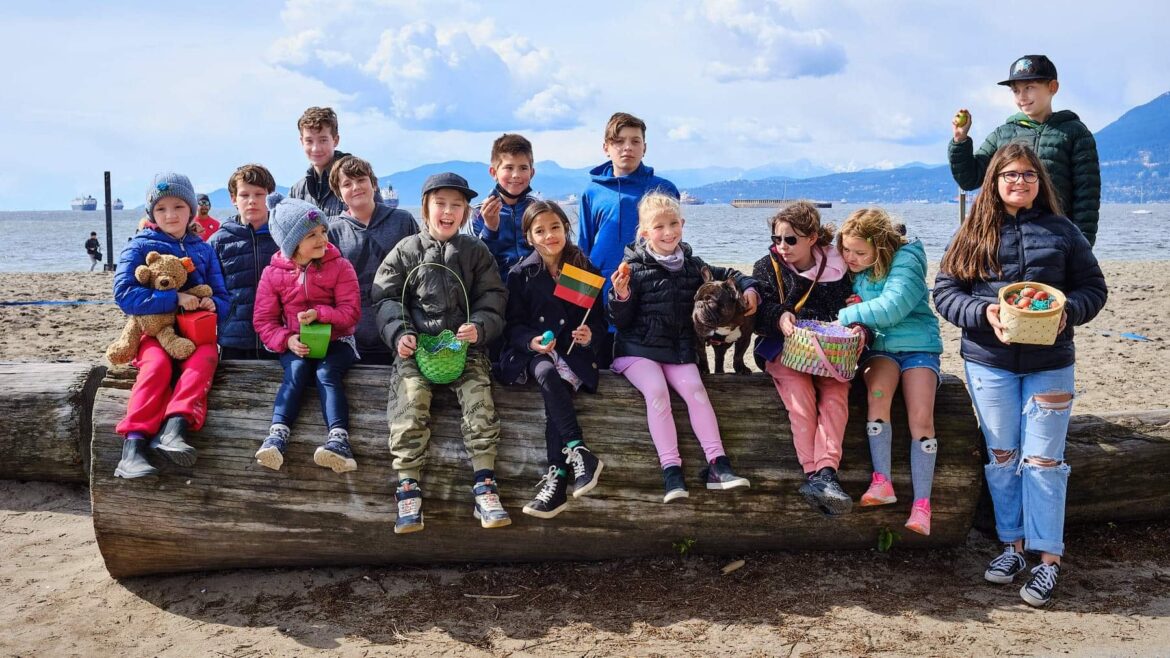 Apie mus | About Us 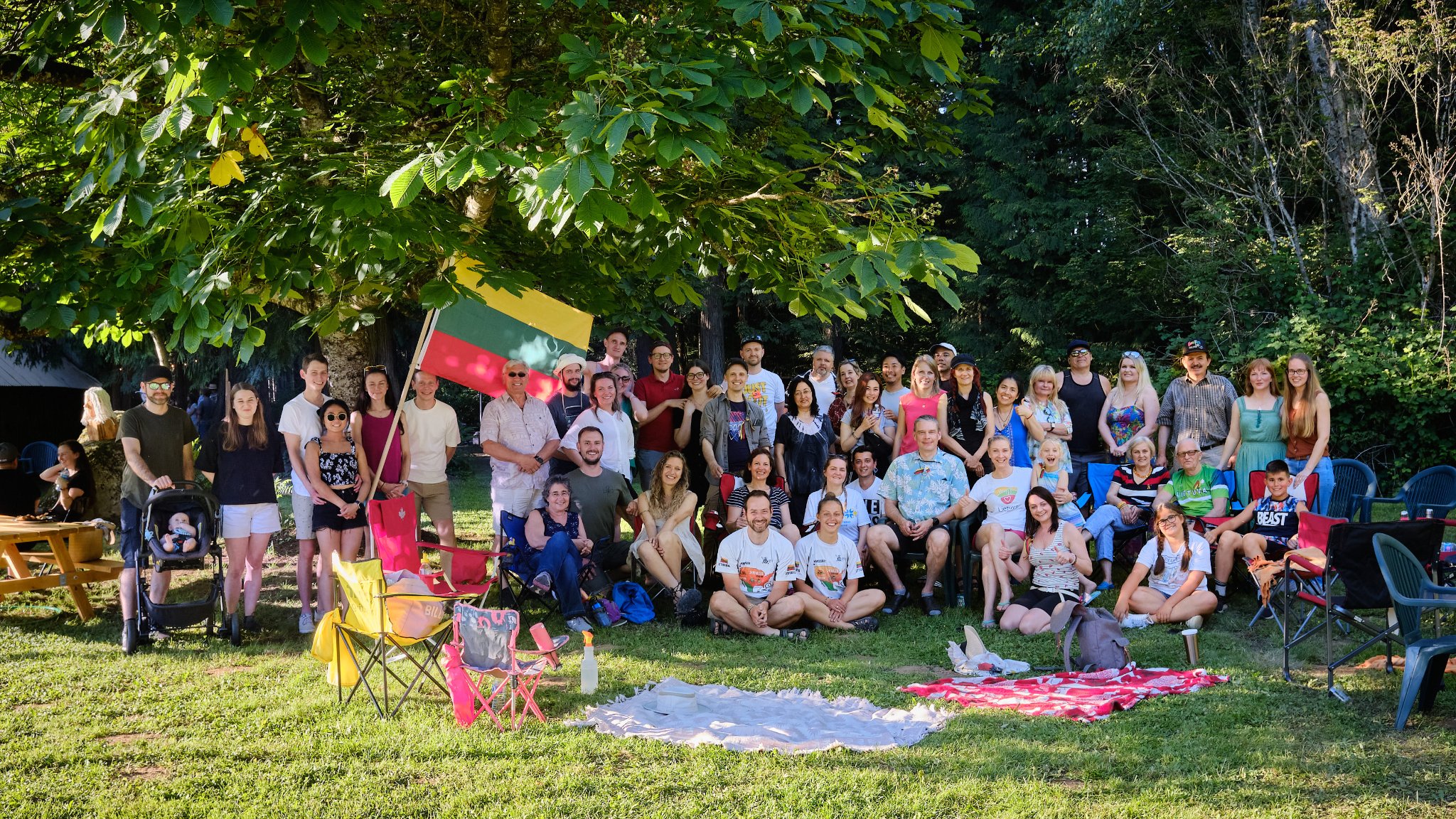